During my short (well, I guess 5 days is short indeed) stay in Kraków, I realized a one, certain thing. No matter how stressful, we always managed to finally reach everything.
For me, that's how it was like with the first day of the Festival (not of my arrival though), a day of the concert of the Master Hisaishi. Unnecessary I felt a bit stressed, because in a moment, we didn't know how to get on the hall of Ocynownia. We were informed it is needed to get there an hour before the concert, however... Hopefully, it was not a truth after all. I mean, we didn't have to come an hour before to be able to catch a festival bus, because there were already a mass of people waiting.
That was the only time I had a ticket for the sector A, a numbered one. It means I didn't have to worry that anybody could steal my seat unless I came in the right time.

But first I think I should mention about the official opening. We weren't sure if we should go there, since this meeting was described as "closed". Actually, there was no problem to enter there. The building in which most of academies and also this meeting took place was called "Manggha" and I'm very disappointed I didn't have enough time to walk around it.
On the meeting, there weren't Klaus Badelt, who, after all, couldn't even come, as well as...of course, Joe Hisaishi. I guess he was too busy to come, or something like that. Maybe last rehearsals with the orchestra? Anyway, it was definitely worth to come. That was the first time I have seen guests of the 4th Music Festival and it was somehow very exciting. I will tell you more about the translator of Masashi Hamauzu, but he already showed his skills, translating words in Polish for the public. Greetings we heard from everybody, Arnie Roth, Masashi Hamauzu, Adam Skorupa and Krzysztof Wierzynkiewicz or Bartosz Chajdecki. We were able to get an autograph of Masashi and also, photos with him. We didn't make up with Arnie Roth back then.
There we also have bought our programs, or I should say newspapers of the festival. They were very useful. Like for getting autographs of as many artists as possible.

Here are pictures from the Facebook page of FMF: 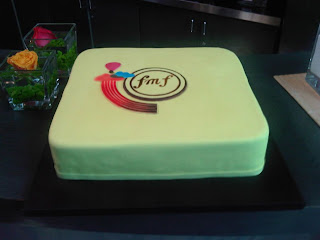 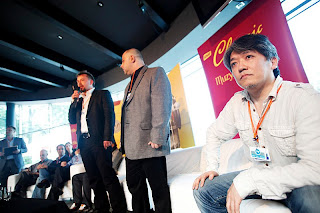 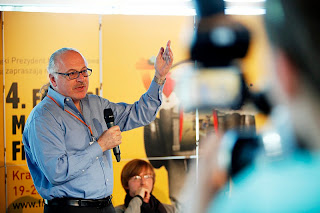 When I first entered to "Hala Ocynowni Arcelor Mittal" I was astonished. It all looked so beautiful! The atmosphere, climate, lights, the big screen, the scene and so on...
Ahead the entrance, there was a room of Square Enix, a poor one, but I must tell you we spend a good time there. It's kinda funny they had only 2 games to play and both for...PSP. These consoles were connected to the bigger TVs. The first one was Final Fantasy IV (yeah, fantastic game for a short play) and the second one was Dissidia, I don't remember the full title, but it has a multiple characters from all Final Fantasy series, good and evil ones. It's brawl. Besides, there were TVs on the sides showing trailers of some FFs.
Despite that, very much time we spend in the competition few steps further, which took a place every day. The rule of it was to adjust the titles of movies to their music. Every of users had been given a paper with 4 titles - A, B, C, D. Later, lady turned on the music and you had to recognize from what it was. Practically, when you had already guessed 2 titles, you knew the answer after knowing the 3rd one. Clearly, if you knew it was for example "B, D, C" then it is obvious, the last one is A. The prizes were shirts and leashes, but once we also won tickets, for the sector A!
It was really easy to win, just after you played few times. Some of sets were even the same, so you could remember the sequence of answers.
That mainly was all what caught our attention when waiting for concerts.
There was also some kind of bar, but not for poor me.


The worst of all is that I didn't take photos of all of those places. Maybe I will find them somewhere on the Internet, but...I bet that. Generally, I regret not taking pictures of many nice things. I was always forgetting about that. First, few poor pictures made by my poor camera: 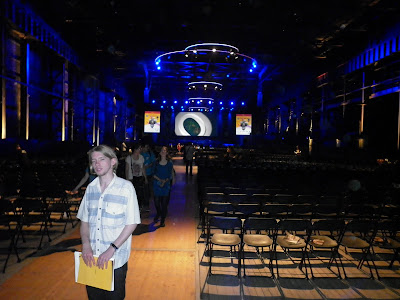 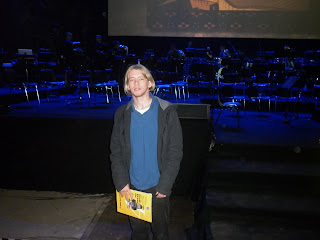 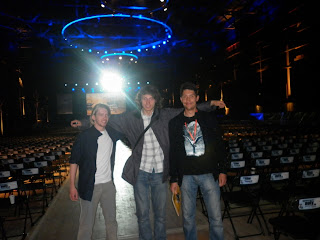 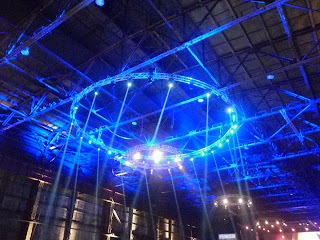 Here are ones you can find in fmf gallery (nice contrast): 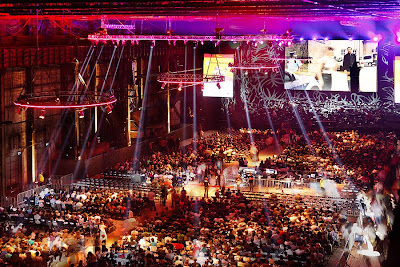 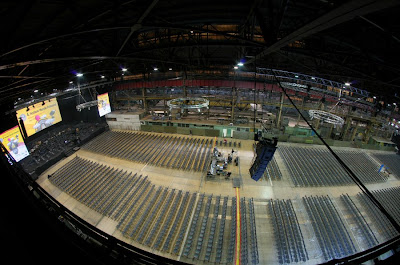 My next article (asap) is the most important one, the concert of Great Master.
Posted by batatshi at 16:10