To tell you the truth, I was much looking forward to see an adaptation of "Norwegian Wood" by Haruki Murakami, since I've got really weak imagination and was interested how exactly it all looks in reality. I don't really know details, if same author had a share in making the movie, though. I also never heard about Tran Anh Hung (the director), but that's rather nothing surprising.

First, I should present what the story of "Norwegian Wood" is about.
Let me quote Wikipedia, since today I'm really lazy:

"In Tokyo in the late 1960s, students around the world are uniting to overthrow the establishment and high school student Toru Watanabe is a quiet and serious young Tokyo college student whose personal life is in tumult. Toru loses his best friend Kizuki after he inexplicably commits suicide. Toru, now becomes uncertain as to how he should view life and as he looks for a new life, enters a university in Tokyo. By chance, during a walk in a park Toru meets Kizuki's ex-girlfriend Naoko, and they grow close since they both share the same loss but as they grow even closer, Naoko's sense of loss also grows. At heart, Toru is deeply devoted to Naoko, a beautiful and introspective young woman.

After Naoko's 20th birthday, which she shares with Toru, she withdraws from the world and leaves for a sanitarium in a remote forest setting near Kyoto to regain some emotional stability. Toru is devastated by the situation, as he still has deep feelings for Naoko, but she is unable to reciprocate. He also lives with the influence of death everywhere, while Naoko feels as if some integral part of her has been permanently lost. He continues with his studies, and during the spring semester meets an attractive girl and fellow student Midori – outgoing, vivacious, supremely self-confident – who is everything that Naoko isn't. The story then follows Toru as he is torn between the two women in his life and he must choose between his past and his future."
The story was incredibly dramatized. Of course I can't deny its sadness, but I still remember there were also some funny parts in original. Here you can hardly find any. Nothing about commando.

I'm thinking as to how people not reading book, find this film. For me, I can clearly say there are many fragments which you may recognize only if you read the novel. This adaptation is very shortened, and there are many scenes when the director wants to show you just a little hint and you should recall everything to yourself. That's how it looks like for me.
Does this make the public not-knowing the original like "what is happening?". I don't think so at all. They just have no idea this actual scene has a continuation.
Some of them also are kinda changed. Of course it is logical that they shouldn't or even couldn't not change anything, however sometimes I feel it is too much. Or they are shortened too - then you have a feeling that if they weren't, you would differently perceive a certain moment. Still, there were quotes simply taken from the book.

Judging by novel's texts, I really like heroes creations and the play of practically each of them (. Amazing are locations. 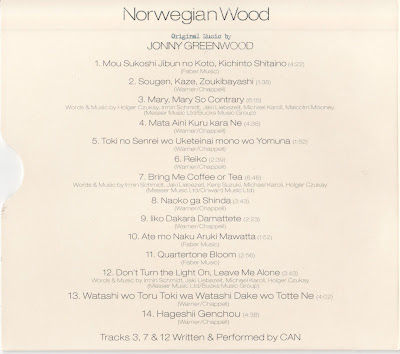 Music... So, music is very climatic for this dramatical image made by Tran Anh Hung. However, being frankly with you - I don't really recommend to listen to this soundtrack separately. In my opinion it's just boring. Not bad, but boring. Maybe even not repetitive, but too simply. Most of the score was composed by Jonny Greenwood about who many of you probably heard already. Yeah, he is a member of Radiohead and that's from where I know him best. It's funny how on Last.fm I noticed users calling him "a genius".
There are also few tracks by a rock group "Can".
And tell me, how is that possible that the main track of the whole story, Norwegian Wood by The Beatles is not placed on the CD? Unforgivable!
At least it was played on the movie - credits, but there was also a scene when Reiko (a friend of Naoko helping her to recover from a psychological pain) was playing it and singing - just like in the book. It's interesting there is roma-ji in tracklist used.


Even though it supposed to make you cry, I didn't feel to. I guess that was probably because I knew what will happen, sooner or later. I can't tell you how would that be in your case.
I'm not disappointed and I also feel glad I finally reached for that movie. I can't call it a masterpiece, but I'm happy it's actually consistent with the work of Haruki Murakami.
However, I'm thinking about that there should be an another book of him adapted. There are more interesting titles to do it with them. I would die to watch "Kafka on the Shore" or "The Wind-Up Bird Chronicle".
The point is that they present us also the world of fantasy and "Norwegian Wood" completely doesn't. It's good just to be a book and that's all.Unfortunately I don't have high hopes for any of them to be done. But time will show us...
Haruki Murakami is my favorite novel-writer for few years already. But practically every next day, I complain on myself - Why I read so less?
Posted by batatshi at 17:44