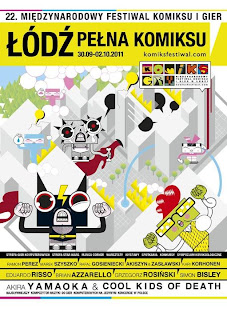 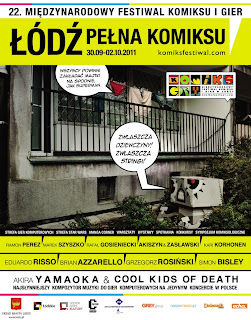 The posters for the festival were very nice made. You can see "Akira YAMAOKA & Cool Kids of Death" below on both of them.
Yes... Akira Yamaoka and his music on the 22th Festival of Comics and Games in Łódź. Really?
When I saw the news of Akira Yamaoka coming to , I just knew I had to see him. Even though I'm not a big fan of his works, it was an another famous Japanese composer of video games music industry in my country.

It's hard to say that his music is so awesome to listen to and I think many people would agree with me, not only these who haven't played in Silent Hill game series, for which (8 parts, if I do remember right) he is the only composer. I'm sure and believe in people's opinions that his music fits perfectly to the atmosphere of the series. But how does it come for separate listening, especially for people like me who just want to enjoy listening music, not necessarily creepy noises? One have to almost entirely link Yamaoka-san with SH, because he hadn't composed much else despite for this series. Some participations in other albums ("Play for " lately, for example), yes, but as a main composer - his latest work is only "Shadows of the Damned" from this year. That's all is extremely surprising, taking into consideration what he said at the conference the very next day after the concert. "Shadows of the Damned" has been released in 2 albums, but, it seems that more of them could possibly be created!