I feel obliged to finally write about one of the best movie I've ever seen. Before I watched it for the first time - I already knew practically the whole story and best scenes of the movie. How is that possible?

This film is something special. When I said "one of the best movie I've ever seen", I really meant that. What in your opinion "one of the best movie" could be like? For me, "The Room" is awesome, because I literally CAN'T GET ENOUGH of it. I guess it's a year after I have been sent a link for one of the most iconic scene (not most, though) and still, I happen to watch something of it almost everyday. It's kind of a narcotic, isn't it?
I happened to watch the whole production after ~1 year of discovering this masterpiece. It does sound strange, doesn't it?

Ok, so... Should I be straight now?
"The Room" is said to be the worst movie ever made. Released in 2003, it gained many fans (especially from the USA, of course), though. Why? Because its badness makes it actually a masterpiece. Right now you probably deduced what is this about - FUN. There are so many fails, so many illogical dialogs, situations that writing a detailed review of the whole film would be a REALLY hard work.
What I recommend you all to do is just write on yt "The Room" or "Tommy Wisseau". You will find there a mass of epic scenes from the movie. My favorite one is "Football Accident" or "Me Underwears".
You'll see "The Room" in "Star Wars", "Zelda", "The Dark Knight"...etc. It's just an another icon of yt. But it's not just "Star Wars Kid" or "this drummer is at the wrong gig" orrrrr "Trololo". They are short and not that brainwashing.

I already mentioned about Tommy Wiseau in the title of entry. You probably realized he is a director of "The Room", but also a main character. Obviously his role is "the best" one, but don't resign to watch other scenes without him. In fact, ALL scenes from "The Room" are ridiculous and it is worth to see them just for fun.

You probably want to know what the story is about?
Johnny lives in Los Angeles, together with her future wife, Lisa. He also hugged Denny from the orphanage. His best friend is Mark. Together with them, he leads a happy life. But suddenly, after 7 years of this state, something is going to change...

I'm letting myself post a few videos of this movie here and... Don't worry about spoilers. Really. But, if you prefer to watch the whole movie first, do this. Also, after watching I want you to check the yt. Because of it you can realize some things you didn't while watching. And, also, there are many fascinating compilations.
Enjoy! 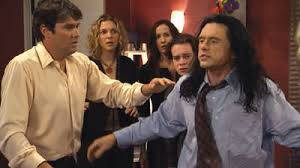 P.S. If you prefer to read, there is even a novelization! (unofficial, I guess).